In common with all the Aprilia 1,000cc V twins, the Futura can suffer problems with the clutch operation. Usually, but not always, these can be traced to a leaking clutch slave cylinder. Other clutch problems, while not unheard of, are rare.

This usually (but not always) happens slowly. 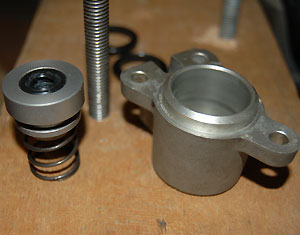 Original clutch slave, with the piston (minus seal) on the left, and the cylinder on the right. The seal fits in the groove in the piston.

In most cases the cause is fluid leaking from the clutch slave cylinder, which sits in front of the front sprocket on the left hand side of the engine. Occasionally it can be the brake line itself, in the bend above the bleed nipple.

It’s common for the clutch fluid to turn black in use and this may be part of the problem – it’s been suggested that the black is actually tiny bits of seal dissolved in clutch fluid.

Whatever the cause, fluid seeps past the slave seal, into the clutch push rod chamber and out of a small weep hole.

This in turn drains the clutch reservoir at the handlebar until there’s no fluid left – especially since the reservoir only holds a tiny amount of fluid (about 8ccs), thanks to the diaphragm that sits in there.

In some cases the leak is so slow that it’s easy to keep on top of by topping up the fluid periodically and maybe bleeding the system.

But this won’t stop it happening and the leak will only get worse as time goes on. There is a school of thought that failure is in part caused by friction between the seal and the inside of the cylinder as the piston moves up and down with each clutch application.

Most failures are accompanied by black marks inside the cylinder.

There is some evidence that since 2001 Aprilia changed the design of the seal to make it less prone to failure. Also the friction problem can be eliminated by applying O ring grease (also called silicon grease), available for about £4 from diving shops and on e-bay.

Owners who have done this report no further problems.

Most aftermarket clutch slave cylinders give reduced lever effort by using a design assembled by a machine – i.e. usually by the manufacturer. Therefore if it fails, you’re stuck. The Aprilia seal can easily be repaired with a readily-available and cheap part with a minimum of tools. I have also seen some DIY repairs done on leaky aftermarket seals.

There is no evidence to suggest an aftermarket slave is any more reliable than a stock one assembled with O ring grease.

The following service guide comes from Ken’s Falco site, which is no longer online:

The Futura has a hydraulic-actuated clutch, as opposed to the cable-actuated clutches found on many sportbikes. There are advantages and disadvantages. Some would say the cable clutches have better feel, or one-to-one connection between ones hand and the clutch action. But the hydraulic clutch, while somewhat vague at times, suffers none of the cable friction. This, coupled with the vacuum feedback circuit, means less clutch effort for a heavy-springed big-bike clutch. Also, in theory, a hydraulic clutch should be very reliable with no routing difficulties, lubrication issues, or cable breakage. I’ve found this to not be the case, as bleeding and the seal failure of the Brembo cylinder are more of a problem than they should be.

The Futura clutch fluid has always turned black a couple of weeks after changing it. This has not been a problem, as I flush it every oil change. But recently on a trip, I lost a large portion of my clutch travel. The seal seamed intermittent, and the last little bit of lever travel that did work was very hard to actuate. Needless to say, my hand was cramped up in no time and I did not look forward to shifting. No fluid had been lost, but I suspected the slave cylinder (“control cylinder”) based on the experience of many a Futura, Falco and Mille owner. I removed the cylinder for inspection.

The clutch slave cylinder lies behind the countershaft sprocket cover. Three bolts hold it in place. There is a weep hole in the housing (“flange”) behind the cylinder, and on my bike there was a few drops of hydraulic fluid around this hole. If you are replacing the cylinder, you should probably remove the clutch hydraulic line first, but for inspection it is not necessary. 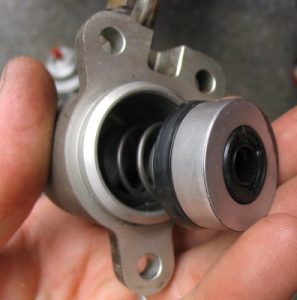 You can remove the piston from the cylinder by pumping the clutch lever a few times. Unlike a brake cylinder, there is no square seal in the bore. Instead, the piston is more like an accelerator pump or fork seal, with a one-way wiper on the piston itself. The bore should not be scratched, and the seal should be flexible and intact. Any nicks or cracks, and a rebuild is in order. The rubber seal on the flat end of the piston is simply a grease seal for the end of the actuator rod. It should be cleaned but is not critical. On my bike there was some grooving of the actuator rod where it touched the seal. If this grooving is sharp, you would want to lightly sand it. 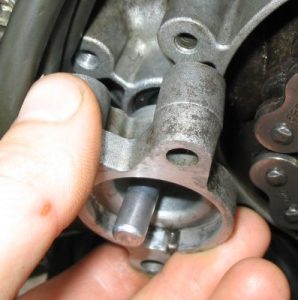 The slave cylinder bolts to a spacer, or flange. This is easily removed and should be cleaned to keep sand and chain grit away from the cylinder. Clean the actuator rod, particularly where it touches the seals.

After cleaning the piston and bore with brake cleaner, I lubricated the seal and bore with fresh brake fluid and reassembled them. A dab of fresh grease in the hole at the end of the piston will reduce friction on the actuator rod. The torque spec on the three bolts is 8.7 ft-lb (12 Nm). The torque spec on the bleeder nipple is 10.8 ft-lb (15 Nm). After refilling and bleeding the system, my clutch lever was restored to its original feel.

Had a rebuild been necessary, there are a few options. I’ve been told Brembo does not sell a service kit. Outside of buying another stock cylinder, ther are several aftermarket options available (ebay is a good place to start your search). Most offer a larger piston which reduces clutch effort, but at the price of a different feel that you may or may not like (generally, more leverage means more travel is required).

Some owners see this as more a maintenance issue than a reliability one and the evidence is that replacing the seal and lubricating it with O ring grease cures the problem.

If you do decide to replace rather than repair, be aware that the slave sits on a mounting that you’ll need for the new slave. Carefully prise it apart because it’ll be stuck.

More information is available on the Apriliaforum, where this problem has been discussed at length. The link below details the problem and the fix well: