The Aprilia RST1000 Futura features an electronic engine management system which is controlled by a Sagem ECU – an electronic brain, if you like. 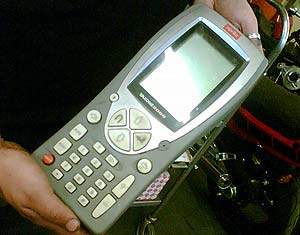 In order for the ECU to work, it must have software – that’s what your map is.

To oversimplify, the ECU monitors throttle position and engine speed and refers to its software for how much fuel to add, and the correct ignition timing.

Aprilia didn’t get the mapping right on early Futuras, and had several goes at it. In about 2003 they released what owners refer to as the 05 Map – the name comes from the Aprilia part number, which ends with the numbers ’05’.

This latest map is widely considered to be the best, smoothing out the fuelling at low revs and improving things right across the rev range.

How can I tell if my bike needs re-mapping?

If the bike is jerky or hesitant when gradually opening the throttle from dead shut, for example, when exiting a slow turn, then the chances are you have the old map.

On some versions you can tell by what happens when you first turn the key and the bike ‘boots up’. After all the instrument lights cycle, the EFI light flashes one extra time. My Futura did this before I had the map upgrade and doesn’t any longer. However, this method isn’t foolproof.

How do I get my bike remapped?

Any Aprilia dealer or service agent equipped with the Axone diagnostic tool (pictured) can do this and it’s a ten minute job.

The Axone is hooked up to the diagnostic connectors (on the right hand side of the bike, close to the battery) and it checks to see if the correct map is uploaded. If not, it installs the new map.

Given that it’s such a quick job, don’t let a dealer try and charge you the earth to do it. At one point, official dealers were doing the upgrade for free at the first service, but many bikes have slipped through the net.

Is it worth it?

In a word, yes! Most riders vastly prefer the 05 Map to previous maps. I said most.