Thanks to James (Jungle) in Australia for sending this in.

It has become clear that some of us want a better sound from our Futuras as can be seen on You tube etc. I personally have also been looking to improve the exhaust note as the after market add ons don’t, to me in any case sound deep enough and are a costly addition if that sound is not what you are after.

I believe that I have solved the problem to my liking by modifying the existing rear can. I have tried to read all that I can regarding this including all that about removing the catalytic converter, using H pipes etc which apparently make no or little difference. 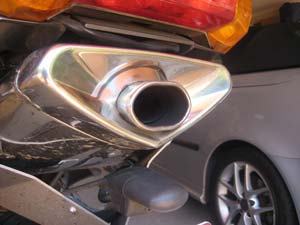 This is what I did.

Remove the muffler from the bike, then grind the spot welds holding the back plate on to the main can and remove it. This comes off very easily as the exhaust itself sits in but not attached to this part. This gives you access to the internals of the can.

In its original configuration the two pipes carrying the exhaust gases from the engine, enter each side of the rear of the can where the gases are forced to travel to the front of the can then back toward the rear before they can exit the exhaust pipe in the centre of the can, very simple and very quiet result.

I removed the centre exhaust pipe all together which feeds from the rear of the can, enlarged the exit hole in the back plate and installed a short stainless steel pipe which I altered to oval shape similar to the original measuring 70mm x 40mm with a rolled end so that it all appeared original to the untrained eye.

This allows the exhaust gases to flow a lot less hindered from the muffler and produces a very nice deep sound without being offensive.

I then reassembled the rear plate and welded it back up. I have had a number of comments from different guys that I ride with all of them good.

I also had the bike retuned as best it could, due the limitations of the bikes electronics to allow for the less restricted gas flow.

Performance has not been effected low down but I believe that it runs a little more freely when giving it a bit of stick. All in all I am very happy with the result, the cost to do this mod if you are unable to do it yourself, in Australia any way would be about $250.00 Aust. a very viable alternative to those costly add ons which for me don’t do it and retain the original appearance of the bike which is important to me as well.

I hope this is of value to anyone. The whole mod took about four and a half hours as I was feeling my way not knowing what to expect and making sure.

Unfortunately I did not take any shots of the modification, stupid of me I know, I will send a photo of the finished product to you though so that you can see the end result. Once I had the muffler apart it was very easy and straight forward to do the mod.

The sound is deeper and more audible without being loud and unbearable even on a long ride.

Regarding the tuning of the bike my local Aprilia tech, an expat Brit did the job for me. I have not upgraded the electronics on the bike so you would be aware the tuning is very limited, I did contemplate upgrading the electronics package but for me it works just fine.

Click on the images below for a closer look at this modification.