You are here: Home › Aprilia Futura History and Development

Built between 2001-03, the Futura was Aprilia’s take on the fast sports tourer market and aimed squarely at Honda’s VFR.

The bike was powered by the Rotax engine from the 2000 RSV Mille, with a Mille-based aluminium frame, a big fairing for better wind protection, a single-sided swing arm, underseat exhaust and hard luggage.

It also had the most comfortable seat this side of a GoldWing.

Right from the start its angular styling divided opinion and despite good reviews in the bike press it never really sold well. Unchanged apart from a cosmetic update in 2003 (except in the US), it was dropped from Aprilia’s model line-up the following year. 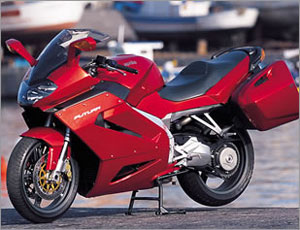 Today the sharp lines of the bike look far less out of place among modern bikes, and its rarity value means it always attracts attention.

More importantly time has shown that the bike is remarkably good at what it does, from two-up touring with a mountain of luggage to solo scratching with sports bikes.

Many owners in the US, Europe and Australasia have clocked up very high mileages with few problems. In fact, it’s fair to say the more you ride it, the more you like it.

The Futura is held in high esteem by a loyal following of owners, helped by the fact that no manufacturer has yet built a bike that will out-Futura the Futura.

If you’re thinking of buying used, have a look at the buyers’ guide and the other links in the right menu.

Use this link to download the Aprilia Futura sales brochure(PDF Format).