You are here: Home › Aprilia Futura History and Development › So why did it fail?

The Futura was launched in Sicily in the spring of 2001 but using pre-production bikes.

at the time only four of the 11 production lines at Aprilia’s Scorze factory turned out 1,000cc bikes, and with the emphasis on producing RSVs, Futuras had to be built in batches. The first such batch of 5,000 Futuras began production in Spring 2001.

Aprilia bosses were proud of the bike, and quick to mention that the Futura was a sports tourer with the emphasis on sport, intended to take on the VFR, the Triumph Sprint ST and the Ducati ST4.

They spoke enthusiastically of improvements to be made in following years – heated grips, a power socket in the dash, ABS, an electronic security system to be developed by Sagem, suppliers of the ECU.

So why did it fail? 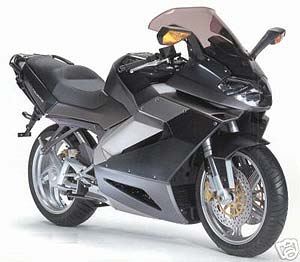 On the whole, the bike was well-received by the world’s press on launch, with only the odd moan about looks.

It won many of the inevitable sports tourer shootouts in magazines yet when it hit the streets in July 2001 it failed to sell.

Except perhaps in the US, Futuras remained nailed to showroom floors and word spread.

Perhaps the bike’s looks contributed to its poor sales, but there are many other factors.

In the UK it was priced slightly higher than the VFR – about £7,900 – which didn’t help when you consider Aprilia was trying to sell to a new market for them – riders who wanted to put miles on their bikes, and riders who were less likely take a risk with an Italian bike for a few hundred pounds less than a proven Japanese machine.

Heavy discounting and cheap parallel imports were too little, too late.

Aprilia’s poor parts back-up could also have played a part, along with bad publicity from riders with broken fuel quick-disconnects.

Add to that the fact that sales of Vee twins had taken a dive with the end of their racing domination, thanks to the arrival of the new generation of pocket-sized 1,000cc fours and the change in World Superbike rules.

Poor sales probably put paid to Aprilia’s early plans for an updated Futura for 2002, and the bike remained unchanged.

However, Pierluigi Marconi’s apparently sudden departure from Aprilia towards the end of 2001 must have played a part – or maybe was the result of Aprilia’s reluctance to promote the Futura.

In 2003 it got a facelift but it was purely cosmetic – a new two-tone paintjob with large silver sections – possibly to counter criticism that the bike looked ‘slabby’ – and two new colours, Darkness Black and Blue Hilton.

The seat was slightly changed and the RST1000 Futura decal at the top of the middle fairing sections was removed in favour of an ‘RS Touring’ logo on the seat panels.

The word ‘Futura’ no longer appeared on the bike, although it was still sold as such.

There was also further evidence of cost-cutting, with the end of colour-coded panniers.

The RS Touring, which also sported a graphic on the tank celebrating Aprilia’s entry into Moto GP, was a last ditch attempt to make the bike sell by jazzing up its understated looks.

It was produced for the European, UK and Australasian market, and in some countries the bike was sold with panniers and a U lock thrown in. The only technical change was a new, much improved ECU map, which became known as the 05 map.

The end result was that RS Tourings sat unsold in showrooms alongside the older models and that was it for the Futura.

It appears that while the bike remained in Aprilia’s catalogue for 2004, no more were built.

Already dealers had started heavily discounting Futuras. In the UK, parallel importers killed the official market by selling European models for a little over £5,000 – a massive £3,000 off list price.

But even though Aprilia had taken a massive loss on the Futura, the company was in trouble long before the last RSTs were built.

next: Will there be another Futura?