You are here: Home › Featured bikes

Thanks to James (Jungle) in Australia for sending this in.

It has become clear that some of us want a better sound from our Futuras as can be seen on You tube etc. I personally have also been looking to improve the exhaust note as the after market add ons don’t, to me in any case sound deep enough and are a costly addition if that sound is not what you are after. 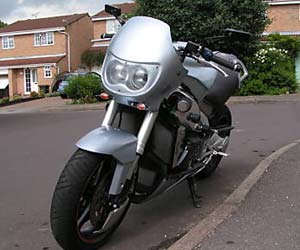 Some bikes divide opinion… this one may not!

As bikes get damaged in accidents more and more are emerging re-born, and pretty much always minus their fairings.

This one appeared on ebay a few years back and found a new owner who has apparently sold it on since.

Originally registered in 2004, it was written off – fairing and clock damage – by its first owner and bought as a damaged repairable by the seller, who fixed it up and ran it for three years.

In August 2010 this brand new Aprilia Futura appeared for sale on e-bay UK, with an asking price of £4,750. But this wasn’t any Futura – it was the first one ever to roll off the production line.

The bike was as new and un-registered, and had never even started. It’s not clear what happened to it, but bidding petered out at £2,727 and it failed to sell. However, it appears that the bike found a buyer privately after the auction ended.

If you ever needed proof that the Aprilia RST1000 Futura was built to do miles then this is it.