If you ever needed proof that the Aprilia RST1000 Futura was built to do miles then this is it. 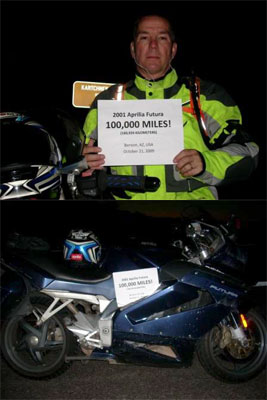 Apriliaforum member Fanatic’s 2001- built Futura is believed to be the first to hit the magic mileage when he passed the 100,000 mile mark one morning on his way to work in October 2009. And as you can see from the pictures, he was ready for the occasion.

But even more remarkable is the excellent condition of the bike after covering all those miles and how few issues Fanatic, who has owned the bike from new, encountered along the way.

The engine is as strong as ever with 5,000 mile oil changes (Mobil1 Fully Synthetic with about 6 ounces of Lucas synthetic oil stabilizer) and a single exhaust valve adjustment at about 55,000 miles.

It’s also had a single set of front brake pads. It’s had a chain and sprockets every 15-20,000 miles and although a little tired, the stock rear shock is still in place.

It gets a hydraulic fluid change once or twice a year, a fork oil change every year, and goes through three rear tyres and 1-2 front tyres a year.

Apart from the usual clutch slave issues – dealt with at 15,000 miles by replacing the stock slave cylinder with an Evoluzione item – most issues have been electrical.

It’s had a coil, a turn signal relay and a starter solenoid, a couple of headlight bulbs, but most annoying have been two or three mysterious electrical faults. 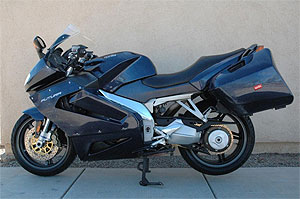 Fanatic explains: “The electrical stuff, which I won’t touch, has been the only real sandpaper in the KY jelly.

“Once I had a phenomena where the front end electricals were working fine, but from the battery back nothing worked. My mechanic determined there was probably a wire chafing somewhere but he couldn’t pinpoint it, so he just ran a patch and it has been fine ever since. There have been maybe two more episodes of a mysterious electrical issue that he fixed.”

Other than that there’s only been one fly in the ointment: “I had a mild low side in Dec 2006 that put some Arizona pin stripes on both sides and snapped both mirrors off. I replaced the mirrors with ones from a Mille. Can’t see sh*t behind me but they’re legal and have the integrated turn signals.

“I didn’t replace the fairing bits. My plan was to paint it the red colour, which is what I wanted when I purchased it but the dealer only had blue. Nearly three years later that’s still my plan, but it’ll have to wait!”

The bike has remained pretty much stock. It got the 05 Map early in its life, but other than that the only mods are the clutch slave and a Brembo radial brake kit from AF1. Oh, and detachable heated grips from Aerostich. 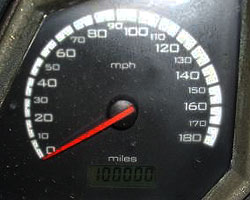 “So, I’ve put about 81K miles on it since I started my new job. During my commute I usually cruise at 80-90 mph on the way to work, and I ride about 80-110 mph on my way home. I return through the twisties – great stress reliever!”

The remarkable condition of the engine may also be due to its sympathetic treatment from cold: “I let it warm up for 3-4 minutes before I leave my driveway.

“That usually puts it at about 120 degrees (F). It takes me less than five minutes to get out of my neighbourhood. During that time I never get it over 3000 rpm, so once I get to the main road it’s probably at about 150 degrees. Once I hit the main road I don’t baby it, but the speed limit is 50 mph and I usually stay below 60 until I hit the superslab. Once I’m on the interstate I definitely don’t baby it, cruising at 85-95.”

So a Futura will last at least 100,000 miles in the hot and dry climate of Arizona, but this bike’s never seen rain, right?

Wrong. Fanatic again: “I’ve ridden it through rain, snow, sleet and bone-numbing cold, and it just keeps purring. It’s a great machine, plenty of grunt, and the engine is as reliable as a tractor. My only complaint is that I don’t get over 40 mpg, but it’s a shortcoming I can live with!”

Fanatic is thought to be the first owner to clock 100,000 miles, though there are many not far behind on both sides of the Atlantic. 50,000 mile bikes are relatively common, indicating that despite its flaws the bike was built as well as any production bike.

With 128,000 miles on the clock, Fanatic finally decided to sell the bike to someone who could give her a little more TLC – and not a 600 mile a week commute. The bike is still going strong with its new owner, but isn’t racking up the miles at the same rate these days.