The info in this page was accurate in 2010 but things can change!
New products may be available and some listed here may no longer be. 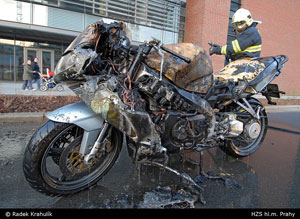 The Aprilia Futura’s original fuel quick disconnect is plastic and prone to breaking, with potentially disastrous results like those to the right.

This, along with the brown connector, is one of the two modifications that really must be done to the bike without delay.

This issue has been widely known for years, yet many low mileage bikes have recently come into the used market with the plastic connectors still fitted.

So if you’re buying, check it’s been done and if it hasn’t, do it! It’s relatively quick to do, and will cost about £50.

The exact cause of the failure isn’t known. Some owners have found it failed by itself, some have found it leaking and some have broken theirs when re-fitting the tank. It’s easily done. 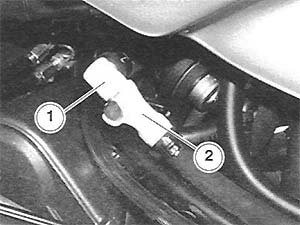 In the lawyer-happy US, the importer recalled the bikes after several failures, fitting metal connectors, but worldwide Aprilia did nothing, and no other importer followed.

Thankfully it’s easily fixed for about £45 by fitting a metal fuel quick disconnect.

In the UK the parts are available from Tom Parker products. You’ll need a male and a female connector with viton o rings (these are safe to use with petrol) and a pair of hose clips big enough as the original clips are difficult to get off without breaking them. 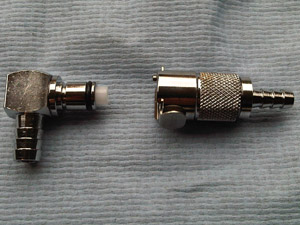 Order from this page: Tom Parker Products or give them a ring. The number’s on the page. Thanks to Clarkey for supplying the picture.

You can also get an identical part from the US importer and Apriliaforum hosts AF1:

Aprilia isn’t the only manufacturer to have trouble with fuel quick disconnect clips – The same unit is used on the MV Agusta F4, and failures have also been known. Triumph had a similar problem on some of their bikes and ended up recalling them.