Aprilia Futuras came out of the factory fitted with a restrictor in the airbox which is designed to reduce air flow.

There is no electronic restriction as on the Falco, so de-restriction is simply a matter of removing the restrictor. In most cases the ECU will need to be re-mapped to get the best out of it. 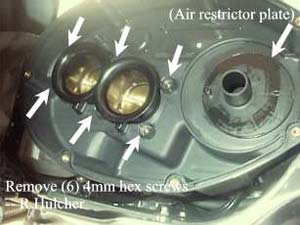 You’ll be presented with either a hole (which means it’s already been done) or a top hat-like contraption as in the picture.

It screws in from the underside of the airbox, so you can either unbolt the whole airbox to get at it – undoing the six bolts in the picture – or just reach in and break it off. Obviously, if you break it off, you can’t put it back again!

In most cases this (on its own) won’t have any effect at all. Griff at Custom Resto & Race in Tamworth – a former Aprilia UK service manager – did back to back dyno runs with a Futura with the restrictor in and with it removed.

The result? No difference at all. 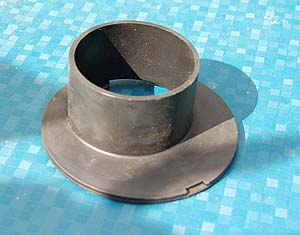 Perceived performance gains can be very subjective and ‘in the eye of the beholder’ and I’d rather go on the side of the evidence.

Different bikes react differently if you remove the restrictor, but all bikes behave the same when de-restricted and re-mapped.

It’s possible that gains can be had with a custom map, but because dyno time is expensive and gains from de-restriction alone will be small, you’re best off combining it with other performance modifications.

There are also other mods you can do within the airbox.