You are here: Home › Buying guide › Touring on an Aprilia Futura 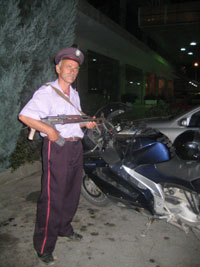 The Aprilia RST1000 Futura is not a bike that needs to be wrapped up in cotton wool and as many owners have discovered, it can do big miles, often at speed and always in comfort.

And those miles don’t have to be on perfect roads – some owners have steered their bikes into some of the remotest areas of the US, Europe and Australia and their bikes have just coped.

If you haven’t done a big trip on your Futura, then maybe this part of the site will inspire you to do it – and if you already have, then it can be added here.

I can either link to your website or forum thread or if you send me words and pictures I can build it into this site. So if you want to recommend your trip report – or anyone else’s, then get in touch.

Below you’ll find riders’ stories of tours in Europe, Australia and the USA.

Spitfire Triple took off for a 40 day tour of 15 European countries, much of it off the beaten path in some of the poorest areas of the continent.

He set up a thread on the Apriliaforum and updated it as he went on his travels, combining it with lots of photos and his impressions of the places he visited along the way. As touring tales go, it’s a classic and You can read it here.

By the way, that’s his bike being guarded by an AK47-wielding Albanian plod at the top of this page.

Captain and Lady Futura (that’s me and the missus). One of my RSVR-riding mates thought it strange that I didn’t include my own 2008 tour on this page, even though it was nothing in comparison with some of the others here.

So here it is: 15 days, 3,000 miles, seven countries, one lap of the Nürburgring, one bout of flu and no breakdowns. See my Photobucket slideshow here. 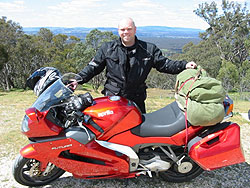 Moto GP’s annual visit to Phillip Island, Australia, gives Djump the excuse he needs to get some touring in.

In 2007 he went the ‘long way round’ from his home in Adelaide via country Victoria, taking in Sydney on the way back and covering more than 6,000 kilometres in 16 days. Here’s his trip report.

His 2008 trip was almost as ambitious, covering 2,300 kilometres in half the time. 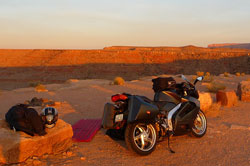 The adventure spirit is strong in the USA and our American brethren have clocked up some truly amazing rides through fantastic landscapes, taking stunning photos along the way and posting them on the web.

Dave6253 managed an astonishing 6,115 miles in just ten days in 2008, taking a massive loop covering much of the USA’s most spectacular scenery.

With so much distance to cover, often in extreme heat, Dave perfected the art of taking pictures on the move. You can read his trip report here.

Not long after this trip was over he was at it again, this time challenging his 43,000 mile Ash Grey Futura to ride dirt roads in Utah. 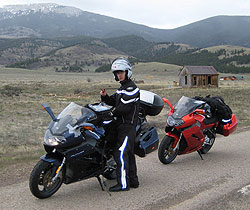 xdbx and his pal took their Futuras on a ride through America’s South West. Words and pictures here.

AZIrish has set up his own mini site with photos and video covering his trip of nearly 5,000 miles from Phoenix, Arizona to Glacier National Park, Montana.

You can see a video he made in the video section.

Back in 2005, Ritten set off from his Louisiana home intending a a big trip but was plagued with bad luck.

First the fuel QD failed, then the brown connector and the clutch slave played up – the perfect example of why you should do these two mods – but he also broke his glasses and had to re-draw his plans to avoid a hurricane. Then he had a brush with a rope…