You are here: Home › Workshop › Fixing › Side stand switch bypass

The Aprilia RST 1000 Futura shares a sidestand cutout switch with all the other 1000cc Aprilias and over time this can give trouble due to corrosion.

It’s placed right where it collects lots of crap from the road, but it could be fair to say that the switch itself is either poor quality or poor design.

The switch operates the amber warning light on the dash, and also cuts the engine if the bike is put in gear when the sidestand is down.

Sidestand light comes on when the stand is up, and/or poor running and/or engine cutting out intermittently with no warning, no EFI light and no code. 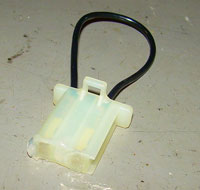 The experience of others has shown that if you replace the switch it’ll only fail again. It’s also expensive to replace at about £40.

Aprilia Racing supplies a jumper, which plugs into the connector to the switch and disables it. It’s intended for use on RSVRs used on the track, but the part is the same for the Futura. If you want to buy the Aprilia jumper, you can get it from AF1 in the USA, or any UK Aprilia dealer.

As an emergency repair, you can also short out the two wires using a scotchlock (or whatever you fancy).

The sidestand cutout is a safety feature, and doing this mod removes that safety feature. If you choose to disable it, you will be able to ride away with the sidestand down, the consequences of which are likely to be disastrous. I know this is obvious, but like anything else on this site, you do it at your own risk.

Incidentally, the sidestand switch is listed as a service item, to be checked, cleaned and replaced as necessary every year or 4,650 miles.

For more information, see the following thread on the Apriliaforum:

Ken’s Falco site, which is no longer available, included a guide to fixing the sidestand switch. We’ve reproduced it here:

Almost everyone owning a Futura, Falco or Mille has experienced a failure of the sidestand switch. For most, the result is a dash light that bears no connection to whether or not the sidestand is actually down. For some unlucky others, the engine cutout function has come in and prevented their bikes from starting.

The root cause of the problem is a plastic locating pin on the switch rotor. When tight, the switch rotor tends to spin from the friction of the sidestand, but it can slip and the plastic pin is supposed to prevent the rotor from getting misaligned. Instead, the weak pin just shears, leaving a stub in the sidestand hole. 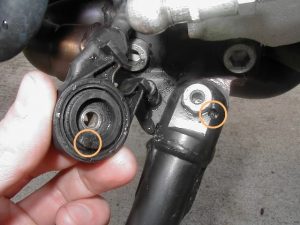 The plastic pin in the switch rotor is easily sheared by the sidestand.

There are several solutions. When mine broke in the break-in period, I just loosened the switch, realigned the broken pin to the hole and tightened it down well. It held like this until about 10,000 miles when it slipped again.
The best solution is probably to complain to your dealer. Aprilia redesigned the switch to use a metal rotor in 2001. Dealers have been slow in getting a stock of these switches, but they may have them by now. As a safety item that probably broke during warranty, I’d expect the switch to be free.
Another solution is to remove the switch and jumper the wiring harness. Aprilia even sells these jumpers for racing use (AP8124943), but you could easily cut your switch cabling and make up your own.  This would disable the light on the dash permanently. 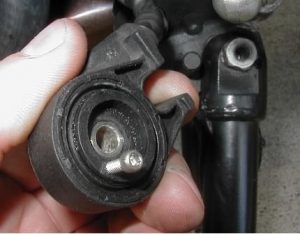 There’s just enough width in the rotor to drill and tap a small machine screw. A bicycle spoke is probably a better solution if you have one on hand.

The solution shown here is simple. Drill out the old plastic pin and replace it with something more sturdy.

Some have used bicycle spokes. I managed to fit a small machine screw in there, but the hole was large so I broke through the sidewall of the rotor with the tap and needed a bit of epoxy to finish the job. There’s a guy on the Mille list who fitted a titanium pin (some people are serious about their weight savings!).