The Aprilia Futura is equipped with 43mm Showa* upside-down front forks adjustable for preload and rebound only.

The forks are similar to those fitted to RSVs (98-03), Tuonos (03-05)and Falcos of a similar vintage but not the R versions as these use Ohlins.

Many owners have switched to these forks to allow them to fit the bigger 320mm brake discs.

The following fork servicing information was originally posted on Ken’s Falco site and has been updated, the pictures are still from a Falco.

Initial servicing should be done at 4,650 miles (7,500 km) (but let’s face it, we’re well past that ;) ). After that, the forks should be serviced every 14,000 mi (22,500 km) I put this service off mostly because there are no oil drain screws, and partly because I’ve never had a bike with USD forks, but at 7,700 miles I had the front end suspended to work on the suspension, so I changed the fork oil then. The following is the procedure I used. I didn’t have a manual to guide me on this, so I can’t guarantee it’s accuracy. It worked for me. 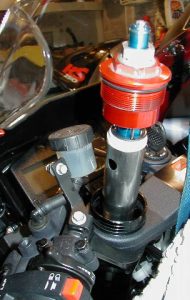 Raise the front of the bike securely so that the front wheel is unweighted. I suspended my bike from an engine hoist. Loosen the top pinch bolts on the triple clamp, as well as the pinch bolts on the clip-ons. Unscrew the fork caps–if you back off the preload completely, they will not be under any pressure. You may want to tape the anodized caps so you don’t scratch them up like I did.

After removing the caps, raise the front wheel so that the forks compress all the way and the fork caps stick out the top, then measure the oil level from the top of the forks. (I think I made this measurement without the forks completely compressed, so my measured values were in error). 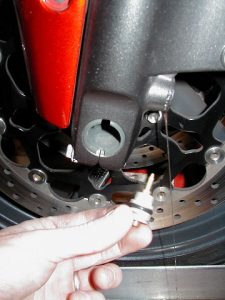 The trick to avoid removing the forks is to drain the oil through the compression valves. For reference, count the number of turns in to seat the adjusters. Then back the adjustment screw out all the way so the needle isn’t contacting the orifice. With an pan or beaker underneath, remove the entire compression valve with a 14 mm wrench and allow the oil to drain.

Replace the compression valves snugly and reset the adjustment screw. Refill the oil from the top. After adding about 8 ounces, I pumped the fork up and down a few times to bleed the cartridge (I’m not sure this works for USD forks), then I compressed the forks completely and set the final oil level. Replace the fork caps, then torque the pinch bolts on the triple clamps and handlebars to 25 N-m. Reset your preload adjustment if you changed it.

The oil that I drained from my forks was very clean (the cleanest I’ve even drained), so it’s probably OK to postpone this service.
Issues surrounding the rear shock and replacement are dealt with on the rear shock page.
*Some countries, Ireland, for example, got Marzocchi forks instead of Showa kit and these have suffered from severe corrosion after winter use.