You are here: Home › Workshop › Servicing › Oil and oil change

Aprilia recommends the following grade of oil for the RST1000 Futura’s engine: 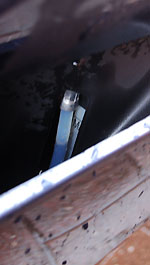 Oil in the sight tube

The owner’s manual recommends two specific brands of oil – made by IP and Agip – and both are semi synthetic, though any oil matching the above specification will be fine.

Oil is one of those subjects that divides opinion – some riders swear by fully synthetic oil and say they have used it with no ill-effects. Once the bike is run in this may be the case.

However, Aprilia UK received several warranty claims for slipping clutches on their 1,000cc Vee twins and refused to pay them when the owners disclosed they had used synthetic oil. Aprilia UK judged that the owners had invalidated their warranties by using synthetic oil.

So you can use fully synthetic if you wish, but you do so entirely at your own risk.

Thanks to the engine’s dry sump, this isn’t the easiest of jobs.

First of all, the bike needs to be hot – not just warm, but hot. A good half-hour ride should do it or get into the habit of checking the oil after a ride.

Then you should be able to see the oil level in the sight tube on the left hand side of the bike. If you can see oil in there, then it’s okay. The tube holds less than 200 ml of oil.

Do not give in to temptation to fill the oil to the top of the sight tube – these dry sump Aprilias don’t like too much oil and have a tendency to spit out the excess into the airbox if you add too much.

The oil catch tube under the airbox. 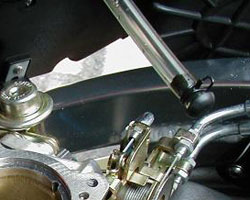 The oil catch tube under the airbox

Oil collects here if you overfill it.The oil level likes to be in the bottom half of the sight tube.

Some owners have got into a vicious circle of topping up the oil to max every week, only to realise the airbox has been filling up with oil.

There is a drain tube (shown right) for the airbox which is fitted with a bung and this needs checking and emptying once in a while.

These engines do use oil so a little oil consumption is generally nothing to worry about. The dry sump arrangement means the oil level can get pretty low without doing any damage. Just don’t rely on this.

Changing the oil and filter

An oil and filter change seems an over-complicated procedure at first, but can be done quite easily by any competent home mechanic.  As previously noted on Ken’s Falco site, the oil change procedure isn’t documented in the US owner’s manual, however Ken did a great write up on the procedure.

And since Ken’s site isn’t available any more, we’ve reproduced it here: 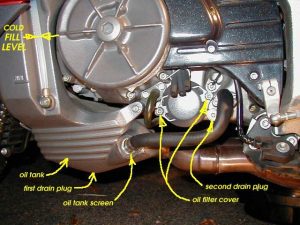 You’ll need to remove both left hand panels and the plate the regulator/rectifier sits on to gain access to everything you need.

Tackle the drain plug at the bottom of the oil tank on the right side first. It is an allen head/hex-cap bolt with a 10 mm head, which can easily round off, so make sure you use a tight fitting key and it’s pushed well into the socket. Remove the bolt and let the oil drain. It’s also magnetic and needs a clean before replacement.  The owner’s manual says to re-torque the bolt to 15 N-m (11 ft-lbs, 133 in-lbs). Due to the poor machining I’ve seen on the oil tank (mine has over-cut threads), I would absolutely tighten this plug by hand. If there is any doubt, use a new M8 aluminum crush washer, and tighten it jut snug enough to feel the crush washer yield. Two people have emailed me to tell me they have stripped this plug, so be very careful!

The second drain plug is located on the kickstand side of the engine. It is a socket cap plug and mine was installed by a gorilla. The first time you remove it, use a tight fitting allen key. If it gives you any grief, use a hammer-driven impact on it instead of rounding it out. The plug is magnetic, and should be cleaned before reinstalling it. Tighten the plug to 12 N-m (9 ft-lbs, or 106 in-lbs). 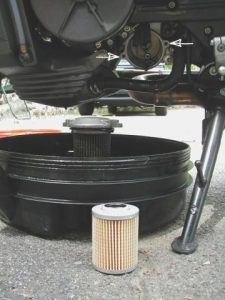 Behind the oil filter cover is a paper filter element (made by Champion, sold at AF1 for about $9). Remove the two socket cap screws shown in the picture (they should come out easily) . The filter fill be pressed into the cover. Pry it loose (remember to note the orientation) and press on another another filter (make sure the o ring seats properly). The o-ring on the cover can be reused. I primed my filter by filling it with oil before installing it. Tighten the two cover screws just firmly.

There is a filter screen in the bottom of the oil tank that is supposed to be cleaned every other oil change. (I have not cleaned this yet, so I’m not speaking with experience here.) A good time to clean it is when you have the recalled hose replaced, because to service the filter you are supposed to remove the lower hose clamp on the oil tank. Make sure you have an extra hose clamp on hand before removing one of the “clic” clamps. After removing the hose, unscrew the tank filter and clean it with compressed air. Replace the filter and tighten it to 30 N-m (22 ft-lbs).

I’ve found that if you fill the cold oil level to the horizontal fin on the engine cover (see picture) when on the sidestand, the level will rise to nearly the MAX line when hot. Start with 3-1/2 quarts, idle the engine for a minute, then you will need to top it off. The owner’s manual recommends checking the oil level with the engine hot (15-20 minutes riding), turned off, and held level. Internet wisdom has said otherwise, but I think there’s more important things to worry about than 50 cc’s of oil.

Re-assemble the whole lot, being very careful with the oil tank bolt as it’s easy to overtighten.

After an oil change the bike takes:

The sight glass will be full to the top at this point, but as soon as you start the bike it will drop as it charges the oil filter chamber.

You might find Apriliaforum member kanhulk13’s pointers for changing the oil useful:

Misc stuff from Ken – I know oil is a controversial subject for some, so take these notes with a grain of salt: 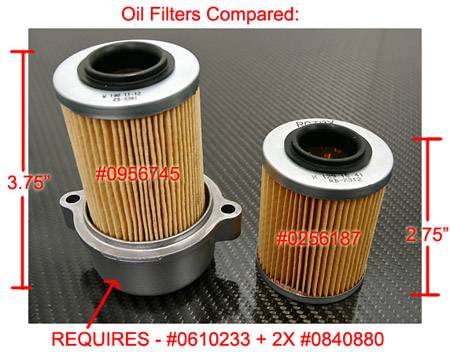 Comparison of new filter and chamber and the old one

Early in 2008 Aprilia issued a service bulletin to dealers telling them to fit a new, larger filter to all 1,000cc Vee twins.

The picture right from AF1 shows the two filters side by side, along with all the part numbers:

The new filter requires a new chamber and longer bolts, which the owner has to pay for – it’s not a recall or a warranty fix.

It’s not clear why Aprilia has done this, as there doesn’t seem to be a problem with oil-related failures in the Rotax motors, but according to anecdotal evidence it’s better to source your own bolts, rather than use the Aprilia-supplied ones.

Especially if you’re in the US, all the parts can be had from AF1’s online shop, otherwise they are available at your local Aprilia dealer.

Here is a list of oil filters that are compatible with the Aprilia Futura motor.