Judging by the experience of many owners, they rarely need adjusting – many bikes have gone more than 50,000 miles before needing adjustment – and it’s normal for the intake valves on the rear cylinder to appear sooty. 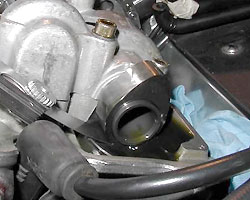 The procedure is exactly the same as for other Aprilia 1000cc Vee twins of the same age including the Falco, RSV and Caponord. Later RSVs got bigger valve heads.

Here’s an excellent guide to understanding valve adjustment, reproduced from Ken’s Falco site, which is no longer available.

The Futura utilizes four valves per cylinder head (two exhaust, two intake), driven by two overhead cams per cylinder head (one intake and one exhaust), and of course there are two cylinder heads. The cams are gear and chain driven off the crankshaft, with a system of guides and a self-adjusting tensioner to keep the chain from jumping. Over each valve stem is a small cylindrical shim, 10 mm in diameter and about 2mm thick. The entire keeper and spring is covered by an inverted bucket, providing a smooth and hardened surface for the cam lobes to push against. In this system, the valve shim sees little wear, and service intervals are high. There are also no rocker arms (or followers) so reliable operation at 10,500 rpm is possible. The downside is that servicing the shim requires removal of the camshafts.

In order to allow for thermal expansion of the valve stem, and wear of the valve seat, there must be some cold clearance between the valve stem/bucket and camshaft base radius. With zero clearance, the valve will not fully close and seal the combustion chamber. Also, the valve cooling comes from the time that the valve is sitting closed in the valve seat. A valve that isn’t in the seat long enough will overheat, particularly on the exhaust side. Too much clearance is not as bad, but will create excessive noise. This is why US spec

Drawing of one cylinder head. Two of four valves shown. Shims are labeled “1” in the diagram. Unlike shim-on-bucket designs, there is no way to extract the shims without removing the camshafts.

machines often have tighter clearances than European spec. Also, the more the clearance, the later on the lobe the valve opens, so duration is reduced and performance at higher RPM will suffer.

As the valve and seat wears in, the clearance will become smaller. A valve clearance that increases would generally indicate cam lobe wear. According to Aprilia, you should examine your valve clearances at the initial break-in service, and again every 9,350 miles. If you find a valve near a clearance limit, you may want to decrease the service interval unless you routinely reset the clearances of all your valves (easy on screw type adjusters, time consuming and possibly expensive on shim type).

The valve check itself is relatively straightforward, adjusting them requires a competent mechanic.  As noted above, because the Aprilia Rotax engine has shim under bucket adjustment, you have to remove the cams in order to adjust the valves.

If you’re riding in a wet climate like the UK, it’s especially a good idea to apply copper grease to the threads of the valve cover bolts of the front cylinder at least. Failing to do so means the weather gets into the thread and the bolt seizes tight.

If this happens to your bike, the only solution is to drop the engine from its mountings because there’s no clearance for a drill. Just don’t ask me how I know…

You’ll find more valve-related wisdom at the page linked below: